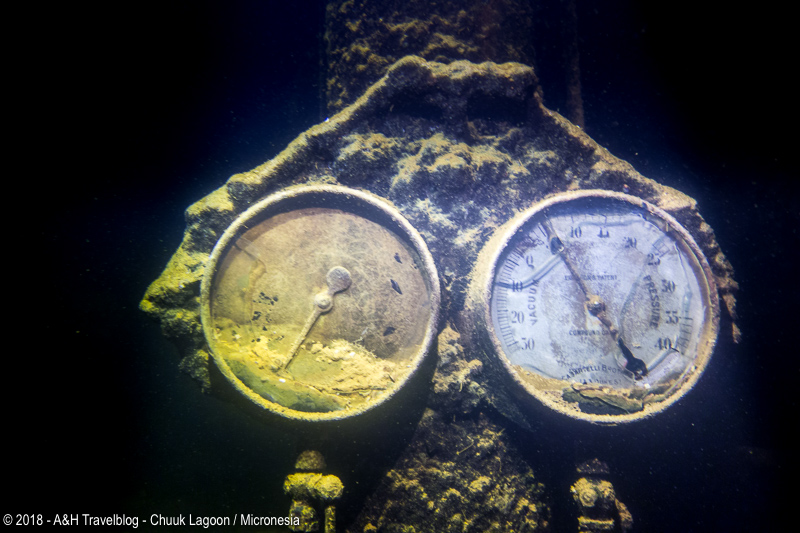 The Unkai Maru was originally a British steam ship with the name of S/S Venus built in 1903. She was bought by the Japanese in 1911 by Nakamura-Gumi Ltd. Being requisitioned by the Japanese Navy on January 5th 1944 she arrived in Truk on the 30th of January.

She was sitting there nearly empty waiting for cargo. The most likely explanation is that she got set on fire by some bullets even though the reports from the Americans say she got a torpedo hit and or several bomb hits. However, there is no visible damage on the hull. Burning through the day, the night and the next day she was still afloat when the planes left.

This makes her an interesting and easy wreck, since the fire took out all the wooden walls and decks and left her with a lot of space to explore.

As we descend through the blue water a mast comes into view and gives us the first glimpse of beautiful coral and fish life. The deck comes into sight next and we try to get our orientation. Fist we want to explore the engine room and the skylights give us a perfect indication were to enter. Through the skylights a set of steep stairs greet us. They are leading down to the cover of the main engine. On the side one can swim down the ladder and enters the darkness of the engine room. The main engines pistons can be glimpsed. But for me the true treasure lies in a couple of gauges that are very photogenic and one can still be read. 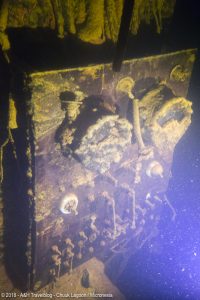 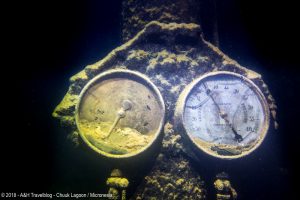 I swim a bit further for more photos and then return to the world of light. On the way out, we pass a galley with the stove and a wok on it. It is very beautiful especially since the deck above lets some light in. Swimming further aft we come to the stern castle and discover an old small anchor (it could not possible be for this huge ship) and some machinery which looks very interesting. 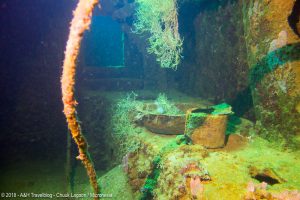 We don’t have much time left, so the swim to the stern and hold No 1 has to be achieved a bit more quickly. On the way we have a chance to marvel at the beautiful coral and fish life. Hold No 1 holds some old leather shoes, a lot of shoe soles and some flasks and plates. This interesting potpourri is made even more interesting by a lone gas mask lying amidst the rest. The forecastle is not so interesting any more since all the planking disappeared and the elements took their toll. The stern gun however still is beautiful overgrown and very well recognizable. 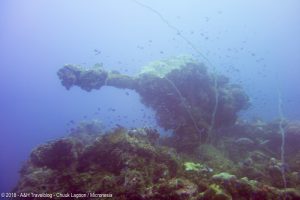 Along its perimeter there are a couple of wind lights and we take the last seconds of time to play with the lights and the camera. Than it is past time to ascend and we stop at the mast on 18 m to look at the beautiful coral and fish life. There are so many little blue fish that look like small jewels and their dance around the mast is slightly hypnotic. I wish I could stay.