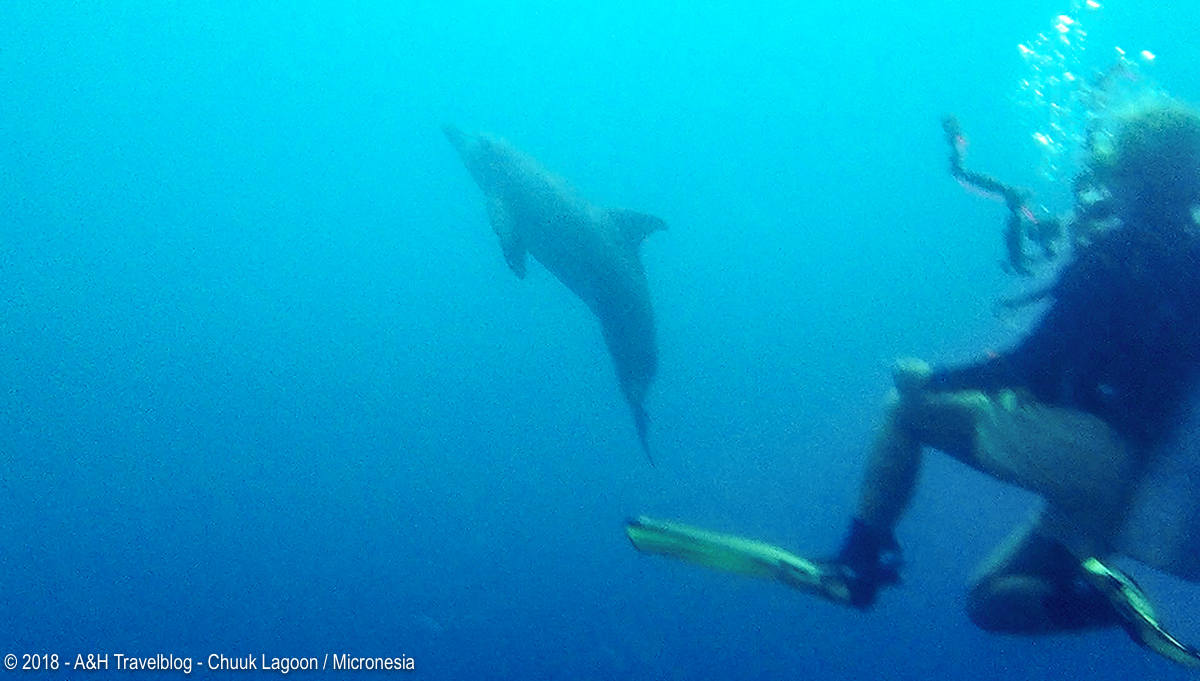 The Seiko Maru was built in 1940 for the Dairen Kisen Kabushiki Kaisha. She initially had civilian cargo duties but after being requisitioned she served as a war material transporter between the Empire and the Inner South Seas. She was attacked on July 31st 1943 and hit by the U.S. Submarine Pogy and later the U.S.S Steelhead while she picked up survivors of another ship that had sunk. She was reported to be in great danger of sinking. However, they managed it, they towed her 243 miles to Truk Lagoon. It is said, that she was in Rabaul just before Operation Hailstorm and came on the same convoy as the Yamagiri Maru, Amagisan Maru and the Kiyosumi Maru. On the 17th of February she was immediately targeted and hit by bombs and set on fire. A little later in the day she got hit by a 500 lb bomb but she was still afloat midday of the 18th of February and sank later that day taking one crew with her.

This is another deep wreck and we descend through the blue further and further until the ship peels itself from the water. The bridge house is steel and a lot is still intact so we start here. Coming in on the side there is a bathroom with urinals still on the wall to the right and then a room that has what looks to be a radiator and some old sinks in it. 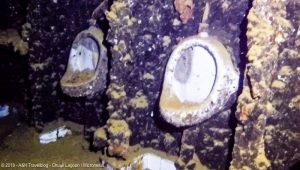 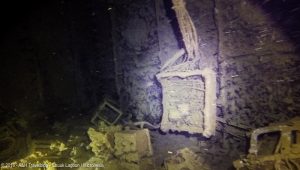 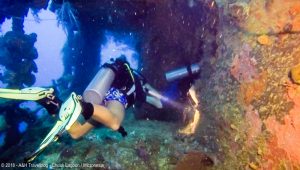 Through a hatch (where the stairs used to be) we swim further down and enter twilight with a room that holds some shards of plates, a few bottles and an old decomposed crate with shoe soles. Swimming through a door one reaches a bathroom with the tub still intact and the tiles are all in place. I really like it (even though it is Japanese design and not European). 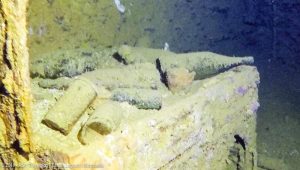 We come out through a side door and make it to one of the holds. There is little on the bottom, some propeller blades, an old Zero fuel tank, some drums, ropes and tires. All in a small heap on the floor. It is interesting to explore though and I take my time trying to figure out what I see. Time is nearly up and we ascend to the deck and swim aft towards the smoke stack. The coral is beautiful and a school of barracuda hover above us. The come up on the smoke stack and get a friendly nod by a Hawksbill turtle resting here. She is not particularly bothered by us and I get a great video. The mast is also a great place to take photos with all the little fish darting around. 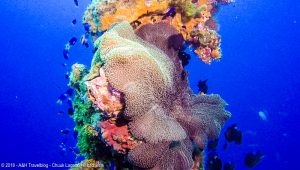 Coming further up I hear it and get all excited. I signal everybody I hear Dolphins. They shake their heads but I am 100 % sure and keep looking till my eyes go big and bigger still. This is enough for everyone to turn around and see the mother with calf and one more adult passing us being 5 m away. I am so excited. having tried this in the Caribbean I start to sing and sure enough some Dolphins come to check me out. I could touch them if I reached out but they are too quick for me and so agile. It makes me feel very clumsy and foreign in the water. The encounter lasts maybe 1 minute maybe a bit longer but all during the safety stops I marvel at the thought of seeing those graceful animals while diving. I don’t stop singing and everybody else is also humming. The Dolphins don’t return (maybe we are off key) but the smiles stay on our faces for sure. 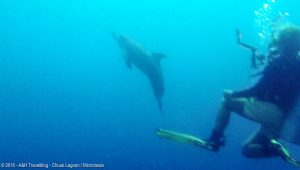 We do not guarantee dolphins, but wrecks =). Book with us here...
Category: Dive diaryBy Captain Lance HiggsJune 20, 2018