The Nippo Maru was built in 1936 for the Okazaki Honten Steamship Co. Ltd. based in Kobe. Two of her six sister ships were also sunk in the Operation Hailstone attack, the Momokawa Maru and the Kikukawa Maru.

She initially carried supplies (mostly food) from Taiwan to Japan and back. She was requisitioned in August 1941 as a water transport ship to outlying Japanese island garrisons. While on the way she was also loaded with general supplies and ammunition. She had a lot of luck just before Operation Hailstone when she managed to get away from an attack launched by the submarine USS Skipjack (which sank two other ships in the convoy).

During the attack on Chuuk she got hit by 500 lb bombs early which caused much damaged and set her on fire. When the planes came in on their next attack she had sunk from sight.

The Nippo is a deep dive and jumping in the blue ocean without a reference other than the mooring can be a bit challenging. We stay together and make sure everybody is comfortable and descend. On the way down a school of Jackfish investigates us but doesn’t stay.

There are white circles to be seen first and as we descend further it becomes apparent, that those are the China plates on the bridge.

She has a list to the port side and we make our way forward to hold No 3. On the starboard side before the hold is an old machine gun. The double barrel looking at the bridge. In the hold there is debris and an old kettle and somethings that look like engines. Otherwards lots and lots of bottles most covered with silt. They are said to have been beer bottles. Crossing to hold No 2. there are old tanks that probably held water. The attraction here however is the tank on the port side. The barrel is not installed but it still looks really awesome. 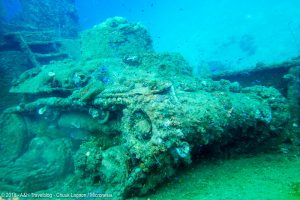 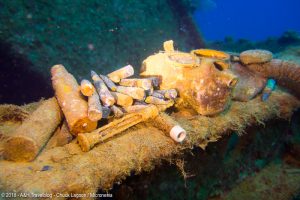 Further towards the bow there is a truck frame on the deck and one lying beneath the ship in the sand. Hold No 1 is really interesting with old ammunition. A mixture between machine gun and 12 cm shells. Some old shoes and gas masks can also be seen. The most interesting items have kindly been stored on the cross beams so we don’t have to dig in the dirt. 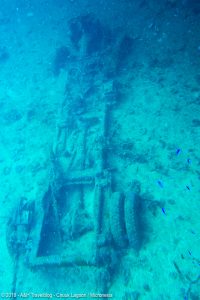 The bottom time is nearly up and we skip the bow gun to get some time at the bridge. The wheel house is really cool with a speaking tube to the engine room. A beautiful overgrown telegraph and the remains of the wheel. It looks like R2D2 and with the proper lighting it shows its beautiful red color. 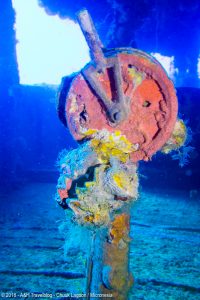 On the bridge house there is are the Chinaplates that greeted us on the way down and the patterns are still amazingly intact. I fall in love with them and keep gazing down as I come up.

The safety stops are fun cause team Swiss dances with me and takes the challenge to form bubble rings very serious. They are a lot better than me. A school of barracuda gives us a glimpse but unfortunately is not interested to come closer. After 40 min the dive is over.