She was built in 1936 as a commercial oiler for the Nippon tanker shipping company. She was requisitioned by the Japanese Navy in 1941 and served as a tanker in the 4th Fleet. She was heavily damaged by the USS Haddock (submarine) on November 6th 1943. Fires started aboard and 2 crew members died of their wounds. The Hoyo Maru was towed to Truk Lagoon for repair. She arrived on the 10th of November. And was still in repair anchorage when the Air strike hit. She got hit by a bomb and turned upside down before sinking to the bottom. Six crew aboard were killed.

This is often picked as a Night dive and we come here with the moon and the stars building an amazing sky above us. Dropping in the black water is a bit of a challenge though and I am very happy, that Reicko the guide, jumps first. As we descend down I am a bit unsure if what I see is the wreck or a reef. The coral is beautiful and swimming along I realize it is much to regular for a reef.

The wreck is turned upside down and we swim along the side till we come to a massive gaping hole. This is the torpedo hit that sack her and even 5 divers next to each other would not have trouble swimming in. The hold inside is just a massive space and it is a bit spooky.

There is no other light than our torches. Where does the wreck start and end? Where is the exit? But Reiko knows his way around and at one point we must be back out because there are more beautiful corals on a wall that is to even to be a reef. We swim under the ship, where the bridge used to be and enter the housing. There is a lot of space and on the open port holes we see some white and red striped prawns. The coral outside makes it look like flowers outside a window. 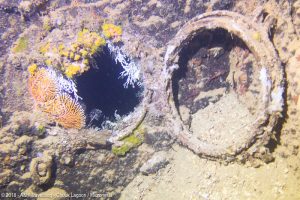 We swim further and find a upside down bathroom with the tiles intact and the bathtub waiting for someone to use it. Even for a photo it is too complicated to do the upside down posing in, the tub only collects our bubbles tonight. We swim further round a bend and get rewarded with three crayfish desperately scuttling to get out of the light. 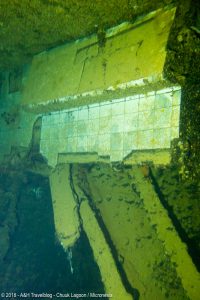 They stir up a lot of silt in their attempt to hide and the visibility gets less and less. This is the point we turn around and swim back. Again, I get this spooky feeling that just because I swam through the door does not mean I am outside the wreck. This only eases when I can see the surface with my torch and I revel in the marvel of the dive.

It is so easy to dive these great wrecks during the day, when all the borders of inside and outside are clearly defined. It is quite a difference experience in the night though and having ended the dive the spookiness only adds to the appeal of having explored the wreck in the dark.

Do you want to dive the upside down bathtub?
Category: Dive diaryBy Captain Lance HiggsJune 20, 2018