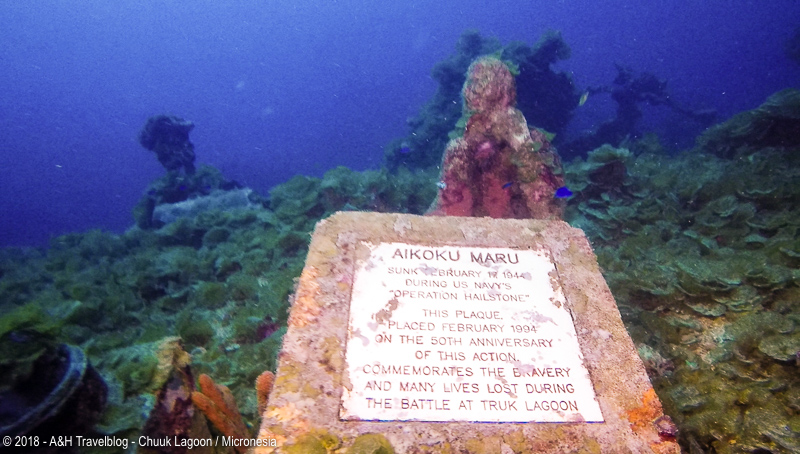 This ship is a deep beautiful dive. And even after one dive, I have fallen under her spell. She is the first dive of the day since she lies quite deep. As we are traveling out to the site (8 min from the anchorage), I repeat what Captain Lance just told us about her. The Aikoku was full of reinforcement soldiers for the Japanese front. Being redirected to Chuuk after the initial destinations were already taken by the Americans, she arrived on the morning of the attack. The front holds were full of ammunition and the back held all the reinforcement troops. Smaller barges and tugs were busy unloading the cargo as the attack began.

From the letter by one of the American pilots, it becomes apparent that they knew their target. Though the Aikoku was heavily armed being a merchant raider, the pilot attacked her all out, “rolling it in the door” (Lieutenant James E. Bridges). Although the plane was up in flames, the pilot flew it into the front holds.

And everything went mayhem.

The onlytwo survivors were tossed hundreds and hundreds of feet in the air and saw the bow fly through the air with them. Everybody else was killed and the souls lost counted somewhere between 500 and 1000.

In 1977, the Japanese came to reclaim most of their dead after the war and held Shinto ceremonies for them to release their souls.

Diving down to this amazing ship, we are first greeted by a swarm of barracuda eying us curiously as we descend. Coming to the stern housing we swim through a small part to discover a bathroom and a lot of animal life. Coming towards the bridge, we pass two overgrown guns and two windlasses. The starboard gun is elevated up to 11 o’clock and was in action till the last second, trying to defend her from the planes. As the bridge comes into view everything starts to look out of place. The foreship is gone as it blew apart and the bridge is heavily damaged with everything just crushed away from the explosion. The compartments midships still hold the remains of the bunkbeds. Only the frames survived but can be clearly seen. 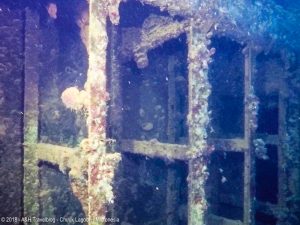 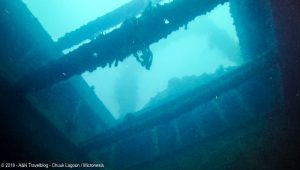 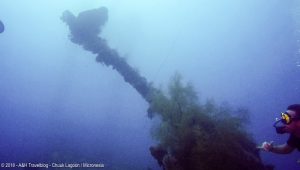 We come around some debris and then we stop at the memorial. In 1994 some Japanese set a memorial here and a Chuukese warrior statue somehow made it here as well. Some bones that are still found lying around are also collected here and everything has the atmosphere of an altar. 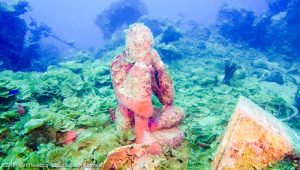 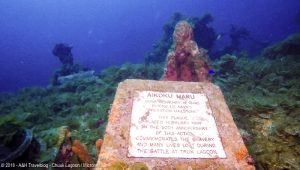 It is touching and somehow depressing to think about all the people who were killed. With heavy thoughts, I begin my ascent as the bottom time was very, very short.

Luckily, we have some Canadians as dive company and during the 5 meter stop one starts on YMCA. And the rest of the safety stop is just spent dancing and moving to the song that runs in my head. It is a great way to finish the dive and I hope that those souls who still linger here enjoyed the show =).