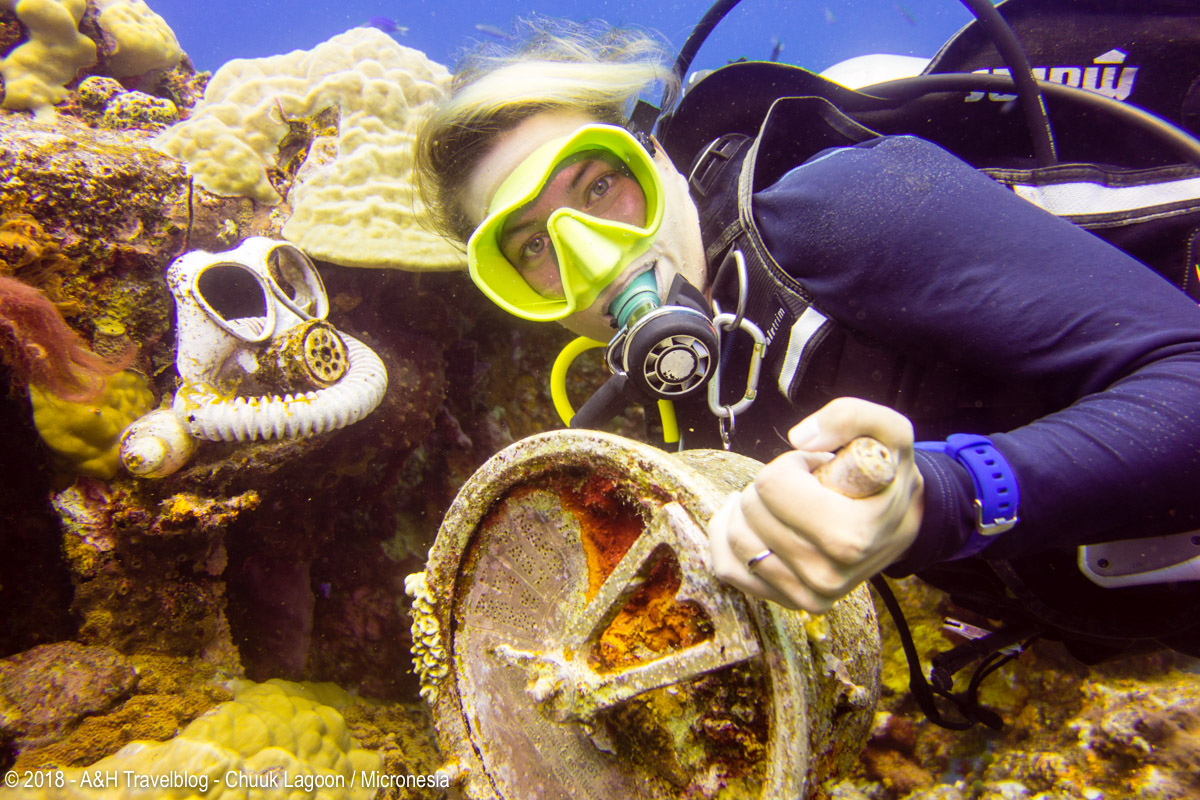 A very special wreck for a lot of divers here. One of the books claims it is T H E wreck in Truk so of course we are very excited when we arrive on site. The sun is hiding behind a lot of clouds so there is not really a perceptible change in water colour but Rico, the guide assures us we are here.
As we descend through a majestic shade of blue, the silhouette peels itself from the water. This time the anchor line is not tied to the wreck but a bit to the portside so we get an impression how huge she is.
She received a torpedo hit steaming from Kwajalein to Truk on the 11th of September 1943 but still made it to Truk (the repair can be seen in Hold 4 and 5). Another torpedo hit her during “Operation Hailstone” in the starboard midship and even though the crew fought to keep her afloat, she sank in the night between the attacks or in the early morning.

We start with the aft holds were some 8 to 10 torpedoes are stalked at crazy angles. Those things are massive and I don`t want to imagine the damage they can inflict. Next we dive through the wall into the engine room which is just fascinating. Coming in though the side we first pass a workshop that has everything from a vice to a lathe.

Two storage rooms full of spare parts are on either side, but we leave these for later. We descend down the narrow gangways into the engine room which is in amazingly good condition. The water has a “white haze” again and it is difficult to see even a couple of meters. Old gauges and switchboards appear and disappear and it is a little bit spooky. As the air we breathe out tries to rise back to the surface it makes a sound that one can only hope does not mean it will all crumple down upon us.
We turn around and explore the workshop a little better. I wonder if all those machines would still work when brought back up, they look very sturdy.

We come back to the light and make our way through some of the lower decks of the bridge with some officers bathrooms. There are 3 sinks next to each other and some toilets.

Coming out the far side we descend to the forward holds that are said to be the most interesting and I can only agree. On the bottom there are some Mitsubishi A6M Risen, the famous Zero fighter planes, they got disassembled for transport to having one wing and the main body, they are awesome and the cockpits are still just a maze of engineering.
We play around a lot and try to get the best photos possible. It is a lot of fun and we need to get moving. So there is one more hold with ammunition as long as my arm. Wondering what gun could possibly fire these I rise up out of the hold and come to the bow gun. And my question is answered. The gun mounted there is massive. The biggest I have seen yet, an old English cruiser gun of 6 ” (or 15,2 cm ) calibre from 1899.

The very bow holds the best surprise for me. There is a telegraph that can still be read, Fast forward and so on. An old gas mask is also perched there.

The gun is on 10 meters of depth so we still have a little time but we need to come up slowly. On the way we get to see a school of Jackfish. The big windlass on the forecastle entertains us with life as we come to the safety stop and then we have to come up.

I am so sure we missed a lot and could discover so much more. Could we dive here one more time? I wonder if I will ask this question on every dive now. So many corners haven`t been strafed by my torch yet.
Let’s see ….