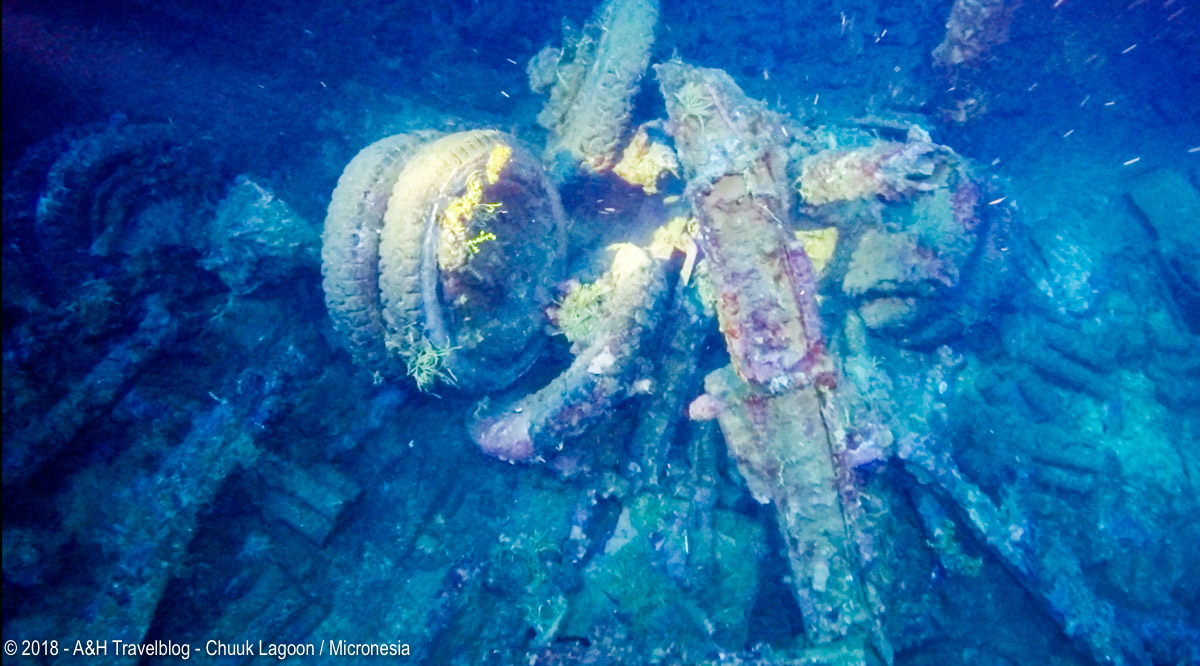 There are two names to the wreck since the kanji letters can be either read Shotan or Matsutan. She is more commonly referred to as Shotan Maru however.

Another morning in paradise and another great dive. The sea is smooth and the 7 min boat ride to the dive site bliss. Just looking around at all the green Islands is beautiful. Now my eyes accustomed a little I can see more and more houses being hidden in the trees. Not that it is crowded with 48.000 population and most of them living in Weno (the main island).

Our wreck this morning is the Shotan Maru, she was a mass built freighter to replace those ships that were lost. Built in 1943 she came to Truk on 6th of February and when the attack hit her with a bomb or torpedo, her Captain appeared to attempt  to run her aground on the shore of Fanamu Island. She is very close to the little island in a fairly deep trough cloesby. Bottom time is 10 minutes so one has to pick up the speed a little. 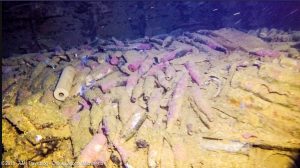 On the forward holds there used to be 3 crane trucks. One is on the port side in the sand and another two have been knocked down into the forward hold below.  The hold is full of glass bottles (possibly SAKE) and various pieces of quad-packed artillery shells  for anti aircraft guns. In the hold closer to the bridge there are many hardened sacks of cement. 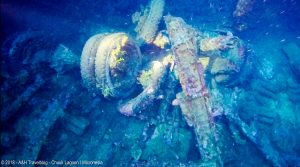 Over the bridge there is a nice array of beautiful pottery with a dark blue rim, on some you can still see the initials of the maker. Pottery is also scattered around the wreck in the adjacent reef. The aft hold is where the bomb that sunk her detonated taking out all of the bottom. So you can see the bedrock she rests on. The mast is still there but bend to the side. On the stern is a gun beautifully overgrown with coral. And than the 10-minute bottom time are up and we start to ascend swimming back to the chimney to see a little more life on the way up.

15-minutes of safety stops and a beautiful Nudibranch later we are back on the surface still marveling the 40 meters visibility and all the small details of the wreck.

This could be the experience of your life. Contact us ...
Category: Dive diaryBy AstridApril 23, 2018