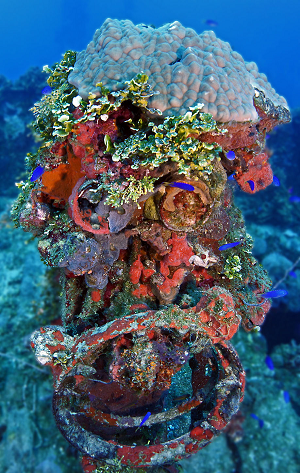 The SS Seiko Maru was launched July 17, 1940 for original owners, Dairen Steamship Co. as a modern cargo vessel of a then unique design with engines aft rather than amidships. This design offered increased cargo hold space eliminating a space robbing propeller shaft tunnel and a need for extended shaft and bearings. Resembling an oil tanker layout, it was reported as a tanker loss by US aircraft pilots during the attack of Feb 1944.

The Seiko had been requisitioned by the Imperial Japanese Navy for its design advantages along with heavy cargo lifting gear for use throughout their Pacific campaign. She was accompanied by 3 other partially damaged ships on a voyage from Rabaul PNG to Truk, for expected repairs when intercepted in the Solomon Island’s ‘slot’ by two patrolling USN subs that fired nearly all of their torpedoes into these vessels. Each ship managed to survive and progress on to Truk with gaping holes in flooded cargo spaces temporarily eliminating further use as freight carriers.

The Seiko was repaired and positioned at Truk’s 4th Fleet Anchorage awaiting service when her luck finally ran out during the February attack with an aerial torpedo into her portside boiler room, taking her quickly down by the stern.

Lying with a slight list to starboard, she is an impressive intermediate depth wreck site accessible to most divers at depths between 20 – 50m.