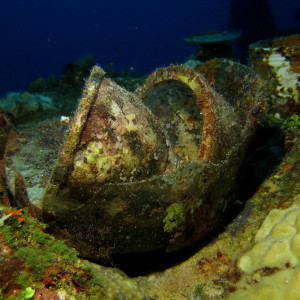 The Shinkoku Maru was built in 1939 by the Kawasaki Dockyard for the Kobe Sanbashi K.K. Line as a modern tanker. Her construction was subsidized by the fuel starved Japanese Navy and her first voyages were carrying oil from the United States to Japan, prior to the embargo.

The Imperial Japanese Navy then converted her to a fleet oiler and Shinkoku Maru’s most noteworthy mission was her participation in the Pearl Harbor attack as part of Admiral Nagumo’s strike force. Later she participated in the attack on Ceylon and then performed general re-supply duties.  In August 1942, she was torpedoed by an American submarine. She was at anchor in Truk at time of the “Hailstone” attack, surviving  two days of attacks and two aerial torpedo hits until finally sinking in mid lagoon at center of then abandoned Combined Fleet moorings.

The ship is one of the most interesting in the lagoon with vivid corals, and fish life along with fine arrays of shipboard artifacts. Night dives are supreme and rank with ‘best ever’. The soft corals and hydroids that emerge after dark turn Shinkoku Maru into a hanging garden and her medical bay is always an interesting diversion along with arrays of engine and docking telegraphs on an upper bridge level. Huge diesel engines and guns fore and aft round out the attractions. Her depths range from 32 ft at bridge deck to maximum 125 fsw at her stern.