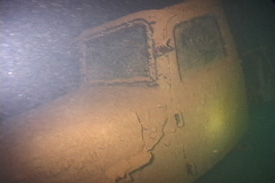 The Nagano Maru was built in 1917 by Mitsubishi Heavy Industries for the Nippon Yusen Kaisha (NYK) Line as a freighter. In the fall of 1937 she was drafted by the Imperial Japanese Army to carry troops to China for the war in Manchuria. She was returned to civilian service until 1941 when the Imperial Japanese Navy took her over. She served on Naval command, until again being placed under control of the Army in 1942.

During the days leading up to the “Hailstone” attack, Nagano Maru was sent south to Morotok (Mortlocks) to supply the airfield there. She returned to Truk just in time for the “Hailstone” fighter sweep and was observed firing on attacking aircraft. This resulted in her being strafed on the first raid and bombed on the second attack. Several near misses severely damaged the vessel and fragments from one bomb killed her Captain. The sinking vessel was finally abandoned and sank on the first day of the operation. Nagano Maru now rests upright at a maximum depth of 220 fsw.