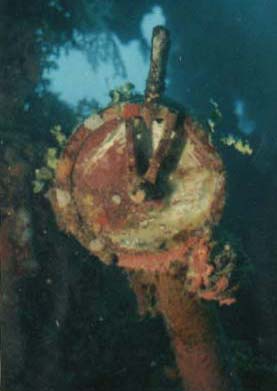 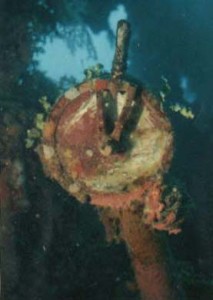 The Kansho Maru was built in 1938 by the Mitsui Dockyard Company as a passenger/cargo carrier for the Mitsui and Kawasaki Lines. The Japanese Navy took control of her when the war began and she was put to work shuttling supplies between Japan and the Marshall Islands. Eventually she was retrofitted with a deck gun and augmented with a Naval gun crew and medical staff for transporting wounded.

Just prior to the “Hailstone” attack, Kansho Maru was in Kwajalein Atoll delivering supplies, when she was bombed by carrier aircraft and took a hit to her engine room. Unable to get underway, Kansho was towed to Truk by the Momokawa Maru and arrived around January 5, 1944. Both ships were located in the Repair anchorage when the “Hailstone” attack began and after losing their protective air cover, were unable to defend themselves from attack and final sinking. The Kansho Maru was sunk by at least one bomb and an aerial torpedo. She now lies in 130 fsw.

She is always a favored site within her interiors as a great engine room and machine shop, galley, and other quarters including the Captain’s room where heavy radio equipment have tumbled through from wasted floors of a bridge above. Her empty holds have a few sights of repair/salvage pumps and acetylene torches/welding equipment.  Bicycles lie in forward hold.