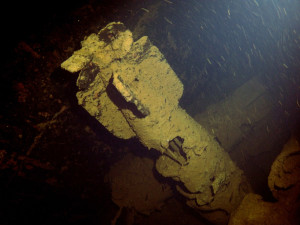 The Heian Maru was built in 1930, by Osaka Iron Works for the Nihon Yusen Kaisha Line (NYK) as one of three identical large passenger cargo liners. Her maiden voyage was from Hong Kong to Seattle. While on a routine voyage in August 1941, she was abruptly recalled to Japan, where Japan’s Navy took her and sisters for conversion to submarine tenders.

They operated in unison with one ship at Truk tending up to 35 submarines, while another would be in Japan for resupply, while the 3 rd was transiting in supply convoys.  The convoys took huge losses from wolfpacks of US submarines and after loss of both sisters, the Heian was retained at Truk inspite of lacking supplies, to provide lodging for the reduced numbers of sub crew remaining.

The Heian Maru was sunk on the second day of the “Hailstone” attack, by Avenger torpedo aircraft from the carrier Bunker Hill. A torpedo struck the engine room amidships setting most of the vessel afire to burn furiously for balance of the day, sinking on her side by day’s end.

At nearly 12,000 tons, she is the largest ship in Truk Lagoon’s “Ghost Fleet”, after postwar salvage of the much larger oiler ex whale factory, SS Tonan Maru of 22,000 tons. She now lies in 90 fsw.