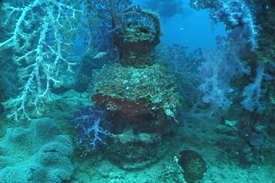 The Hanakawa Maru was built in 1943 by the Kawasaki Dockyard as special transport for the Japanese Imperial Navy, similar in construction to Nippo and Momokawa. This Standard B freighter served from 25 October 1943 until being sunk on the second day of the “Hailstone” raids, while over replenishing the garrison at distant Tol Island Harbor.

During the air strikes, Hanakawa Maru was attacked by aircraft from carriers Bunker Hill and Cowpens. An Avenger torpedo bomber from the Bunker Hill sunk her with a torpedo hit on her starboard bow  setting  her cargo of chemical gasoline drums ablaze. Like the Hoki Maru, the chemical substances were toxic and she was not dived for years until bubbles finally ceased to rise.

She has many soft and brilliant corals on her topsides and masts, although often a murky location at her upright position with depth of 110 fsw to her keel.