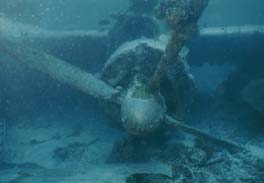 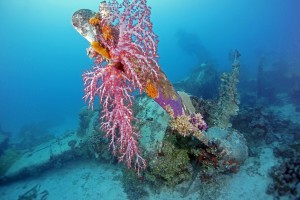 Emily Flying Boat was an Allied code name for the Kawanishi H8K1 Flying Boat. Emily Flying Boat came into view about mid-term of WW 2, and immediately proved a capable and deadly war tool for the Imperial Japanese Navy.

It’s featured long range, greater than even a US B-29 Superfortress was impressive along with its able combat survivability. “The Flying Porcupine” was extremely difficult to shoot down, as being the only Japanese aircraft to employ self-sealing fuel tanks, internal fire extinguishers, and armored cockpit. It was armed with 5 sets of 20mm cannon, and 4 sets of paired 50cal. machine guns all handled by a 16 man crew. In a first test action two ‘Emily’s’ flew from Chuuk via Marshall Islands to high level bomb Oahu’s Pearl Harbor. Only a complete cloud cover prevented their accurately bombing intended targets below. After discharging, they flew back westward, landing in mid ocean to refuel from their submarine ’I-169’ while continuing back to Chuuk unscathed.

The short combat history of the ‘Emily’ is fascinating. In another incident, Commanding Officer of the Fourth Fleet, his Chief of Staff and other senior Japanese Naval Officers were dispatched on a single Emily to Rabaul to survey a bevy of war damaged cargo ships for possible repair at Chuuk. The ships were being repeatedly bombed and strafed by US aircraft from recently conquered Guadalcanal. The US in reading their codes dispatched nine P-38 fighters to intercept and destroy the Emily and its VIP personnel during its vulnerable take-off from Rabaul. They descended with vengeance from 11,000 ft in ambush using their 20 mm nose cannons to kill the co-pilot and injure the pilot. Reacting quickly, the Emily crew shot down 3 attackers in passing, while the injured pilot turned his big craft after the attackers coming out of their dive, shooting down 2 more and damaging another. The Emily’s pilot pulled up into a high speed climb toward clouds above losing the attackers, managing to navigate his damaged craft back to Chuuk, where a water landing broke it in three pieces on impacting the surface. All personnel survived except the dead co-pilot. The pilot was awarded for his bravery and skills.

Today, 3 sections of the giant aircraft lie in 50 fsw on the lagoon floor at site of its sinking near Tonoas (Dublon) Island seaplane base, remaining a symbolic tribute to its builder’s designs and constructive skills.