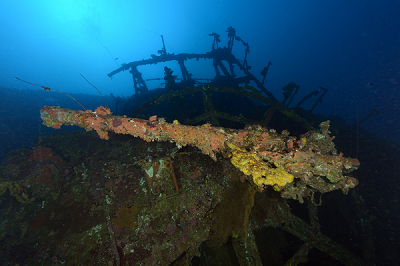 The Amagisan Maru was originally built as a cargo/passenger ship serving the Japan-New York Line. The Japanese Navy took her over in 1943 for use as a special transport.

In February 1942, she was torpedoed by the USS Swordfish near Davao sustaining damages she went over to repair at Rabaul. She was later one of the four ships escorted to Truk for repairs along with Seiko, Kyosumi, and Yamagiri. During the Truk attack she was sunk by an aerial torpedo while carrying aviation fuel and diesel oil drums in her holds. Some of this fuel still leaks to the surface from time to time.

The ship is one of the largest wrecks in the lagoon. Her most interesting features include a photogenic bow gun, torpedo holes and “staff cars” in hold No. 2, a tank truck on the sea floor, mine sweeping paravanes on deck, and a matching stern gun deep at stern. The Amagisan Maru was discovered in 1973 and now rests at a maximum depth of 190 fsw at her stern.