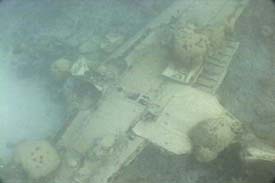 Zero was the Allied code name for the Mitsubishi A6M fighter. The Zero aircraft was designed in 1937 by Jiro Horikoshi for the Imperial Japanese Navy.

The plane saw action throughout the war and was unmatched in speed and maneuverability until 1942 when modern Allied fighters began to appear. Later the aircraft was found to be very vulnerable due to unprotected fuel tanks and easily caught fire. Approximately 11,300 aircraft where built in various models.

The A6M was operated throughout the war in various models by the Imperial Japanese Navy. Primarily a fighter, it was also used as a tactical bomber and Kamikaze attack aircraft. However, after the “cream” of Japanese Naval Aviators were lost at the Battle of Midway, there were never enough experienced pilots available to fly the Zero to its full potential.

This Truk aircraft wreck is believed to have crashed on takeoff from Eten Island. Whether it was shot down or suffered from mechanical failure is unknown. She now lies in 20 fsw.