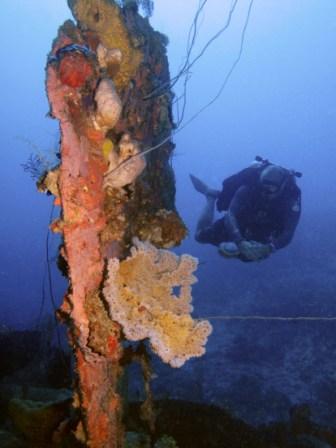 The Hoki Maru is another wreck sitting upright in the Fourth Fleet Anchorage loaded with cargo. At the time of the

US attacks she was carrying a large amount of aviation fuel in the forward holds which caused a huge explosion now leaving only remains of the forward part of this ex-New Zealand ship.

On this glassy morning we therefore decided to focus on the aft end of the wreck and after the short boat ride, we tied up to the mooring buoy and descended onto the mid-ship area. We first made our way to the stern and to the two large propellers and rudder which are at 160ft/50m.

I had already briefed the divers to keep an eye out for sharks and as we approached the sand we were welcomed by two medium sized grey reef sharks and a large black-tip reef shark who seemed very interested in one of our divers who was using a re-breather. They made several extremely close passes and continued their search for breakfast, meaning we could move on and inspect the area more closely.

After a good look around the props and rudder which is over 5m in height, we made our way round to the port hull and entered holds 1&2 through the large torpedo hole. With two levels of construction equipment such John Deere bulldozers, and Japanese trucks, steam rollers and tractors the remainder of the dive was taken up with photos and exploration.

It is amazing to think that this machinery has been down there so long but is still in such fantastic condition and seems still good enough o be put into action!

Once the divers were on 70bar/1000psi we left the holds and made our way back to the line where we were greeted by a large school of jacks circling in the current, and we ascended to our first stop at 60ft/18m.

From there until our 15ft/5m safety stops, a school of batfish came up and brought us great entertainment for the remaining decompression time.

Once everyone was back onto our dive tender Downrider 2, it was back to the Thorfinn for coffee and cookies fresh from the oven.