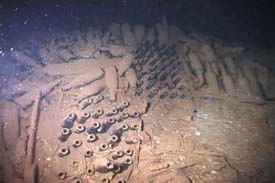 We decided this morning would be a good day to try for this deep, medium sized ex-cargo freighter lying on even keel in 50m of clear blue water. It can be difficult to hook as it is positioned between two ridges but after a 10 minute boat journey on this beautifully calm, still day, we had no problem and within 30 minutes of our departure from the ship, the wreck was in clear view as we descended.

Once on the deck we headed straight for the deepest part which is hold #1 and 2 and after a quick look at the truck that fell overboard sitting at 60m,we entered hold #1 and 2 which are linked and contain trucks and plenty of ammunition. Out of the hold and moving aft, anti-aircraft guns, huge bomb damage and the stern gun covered in soft corals made for some great photography and as the group began to approach 70 bar, we began our ascent. With big game fish such as trevally, dogtooth tuna and barracuda snacking on the abundant fish populations as they swarm and pulsate around the soft corals on the funnel and masts, the ascent was just as entertaining. Once on our 5m stop, the divers were signaling each other their air supplies and checking deco times expecting a drawn out 10 minute stop, but to everyone’s excitement, a small pod of bottlenose dolphins who seemed just as excited as the divers came in for an routine inspection. Amongst the pod was a new mother, her baby no longer than ½ m, who seemed to do extremely well to keep up with the group and after a few minutes of darting and eye to eye contact, they swam off into the blue leaving nothing but some very big smiles on the faces of our small group.